Since we opened for business in 1997, our unique 3d products have found their way into military training materials, combat simulation applications, popular magazines, and television programming worldwide.

In 2006, Mesh Factory became a registered US defense contractor, solidifying our position as a major provider of military-related 3d content to the defense community. Today, Mesh Factory continues a close working relationship with many of the world’s armed forces.

Mesh Factory customers now include many world governments, armed forces, a great number of popular media publishers, and the vast majority of well-known US defense contractors.

We invite you to come and see what we have to offer. In considering us for your 3d content needs, you are helping the 3d artist community by directly supporting the artists. You are also cutting your costs by cutting out the middleman! It’s a win-win!

George Lucas once said many of his films were never finished. From his perspective as a director/screenwriter, they were developed to the point where he had run out of time alotted and mercilessly abandoned. While I realize I will never possess the vision of George, I think I understand what he was talking about as I explore my own life’s work.

Due to the sheer number of projects I’ve taken on over the years, it’s an unavoidable reality that many of my 3d projects are developed to a point where I feel I need to make an executive decision to stop the process and move on to the next subject. If I didn’t accept and act upon that realization, I know the result would be my being stuck on one model subject, super-detailing it to death, and getting absolutely nothing else done for the span of many months.

While it is a lovely thought to be afforded unlimited time to develop each of my 3d subjects, it’s simply not possible. There has to be a sensible deadline set and adhered to. It’s a part of being a professional.

This model which I initially built back in 2004 was one of those that I have always felt was ushered off to market before I was ready to give up on the details and call it finished. I remember the frustration of wanting to model-on but not being able to find enough photos of the airframe to satisfy my lust for detail and realism, and I felt I was spending too much time trying to find what I needed to justify spending more effort.

I’m in the early stages of this re-build, currently converting the triangles to quads and along the way, evaluating where I will be adding super-detailing and estimating how much time I am willing to allow for the rework. During this early stage, I often find my self staring at this one on my multiple monitors, feeling a bit stunned by the realization that the years have flown by between 2004 and now! 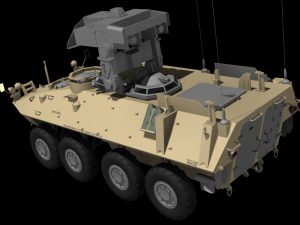 In an effort to fill out the LAV Piranha series of 3d models, here’s the build history on the new LAV-AT USMC desert variant.

The “AT” variant is an Anti-Tank TOW missile equipped Piranha. Military.com states, “…The LAV-AT anti-tank missile carrier is a mobile system is capable of defeating main battle tanks and fixed fortifications…”

After a bit of research, the subject I chose for this project was from the 1st Light Armor Reconnaissance (LAR) Battalion, United States Marine Corps (USMC) dubbed “Hammer of Gods” from Operation Desert Storm, 1991. Markings are Desert Sand (Federal Standard #33531) which was a new look for US armor at the time of Desert Storm. All LAVs were, at that time, painted in 3 color NATO camouflage primarily meant for deployment in a much “greener” Europe.

Since I’ve already built an LAV-AT in NATO 3-color camouflage, I used that geometry as a base from which to create this model. Already I’ve begin to improve upon that geometry smoothing some of the sharper lines on the hull which will give it an improved appearance. 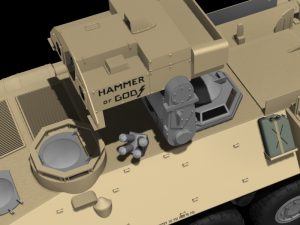 For my second session, I worked more of the texture maps, continuing to enlarge all of them to 150% of their original size for a better appearance in large, close-up renderings. This time around, I created accurate anti-skid coating on the upper surfaces using both diffuse and bump mapping.

After three long sessions, the update was complete and the new model was placed in the catalog on Thurday, November 9th, 2017! Here it is. 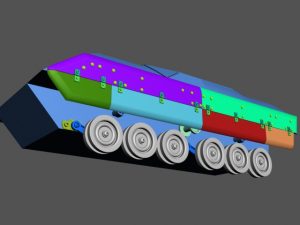 Here is the next subject to fill out our selection of modern tracked armor models. This one is the M2 Bradley IFV which will likely become available in at least two different exterior paint schemes.

Throughout its service life the M2 Bradley IFV series has been updated to improve combat capabilities and survivability for both the vehicle and it’s occupants. According to Military-Today.com, there were three main improvement programs, the M2A1, M2A2 and M2A3, so this subject can be a challenge to model accurately, unless one pays very close attention to the details.

After several weeks of dedicated work on this one, I was compelled to abandon it for a time while focusing on much needed website and database changes to improve our company’s internet presence. Quite soon, I’ll be re-focusing on continuing work on this one, which should lead to other, even newer Bradley variants!